World Results and Analyses for May 2019

World passenger traffic grew by +4.5% YoY in May 2019, +0.2 percentage point higher than the growth in the previous month. Although there was a slight improvement, this growth remained to be one of the weakest performances in the last five years. Both Europe and the Middle East posted a slowdown, with the latter experiencing a negative growth, reflecting changes in the airline business in the region. Russian Federation recorded the fastest domestic traffic growth, followed by China and Japan.

International passenger traffic grew by +4.3% YoY in May 2019, -0.8 percentage point lower than the growth in the previous month. Latin America/Caribbean, Asia/Pacific, and Africa accelerated in traffic growth. Europe, however, experienced the biggest deceleration, followed by the Middle East which became the slowest growing region.

The passenger Load Factor reached 81.5% in May 2019, -1.3 percentage points lower than the LF recorded in the previous month. As traffic growth outpaced the capacity expansion, the May LF was +1.4 percentage points higher compared to the rate in the same period of 2018.

World freight traffic reported a decline of -3.4% YoY in May 2019, +1.3 percentage points higher than the growth in the previous month. Freight traffic started to trend downwards since the end of last year, except for a short-lived growth in March. All regions posted negative growth, except for Africa and Latin America/Caribbean. Africa outperformed other regions, followed by Latin America/Caribbean, albeit with a slight slowdown. Freight growth remained depressing, affected by the global trade tensions. The most significant fall was observed in the Middle East and Asia/Pacific,  which together accounted for almost half of world air freight traffic volume. 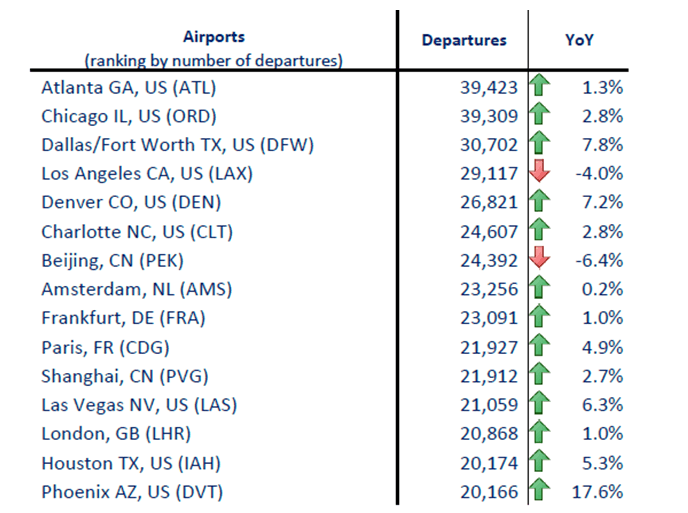 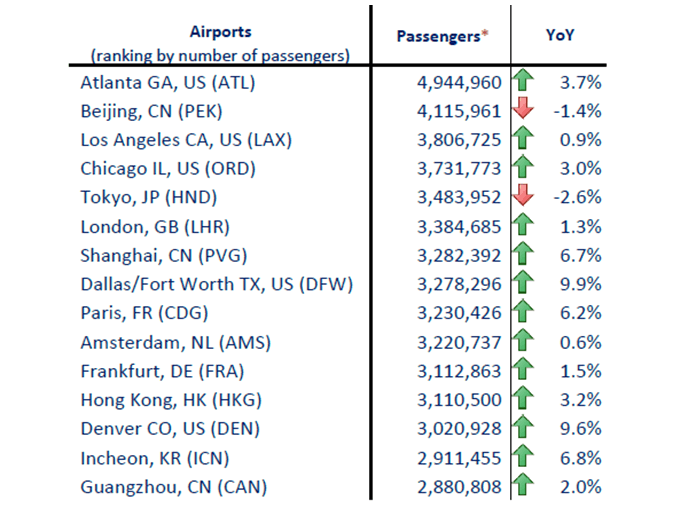 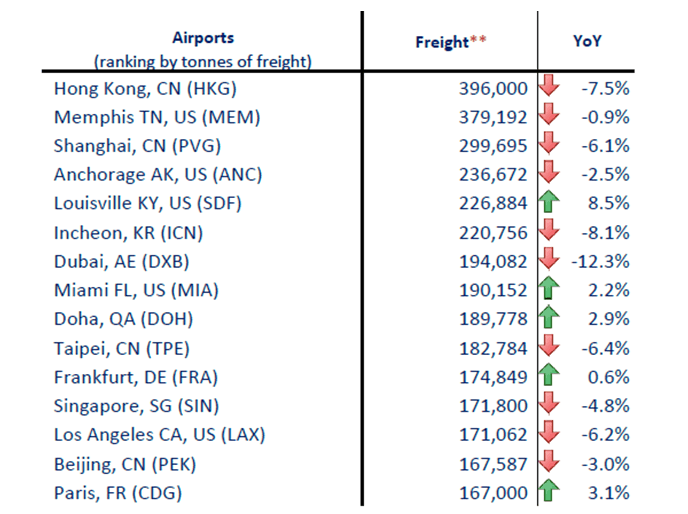 In terms of freight, the Top 15 airports reported a decline of -3.2% YoY. Ten out of the Top 15 airports posted YoY declines, mostly in Asia/Pacific and North America. The sharpest decrease was posted by Dubai   (-12.3%), followed by Incheon (-8.1%) and Hong Kong (-7.5%). Louisville outperformed the other major freight hubs and was up by +8.5%. 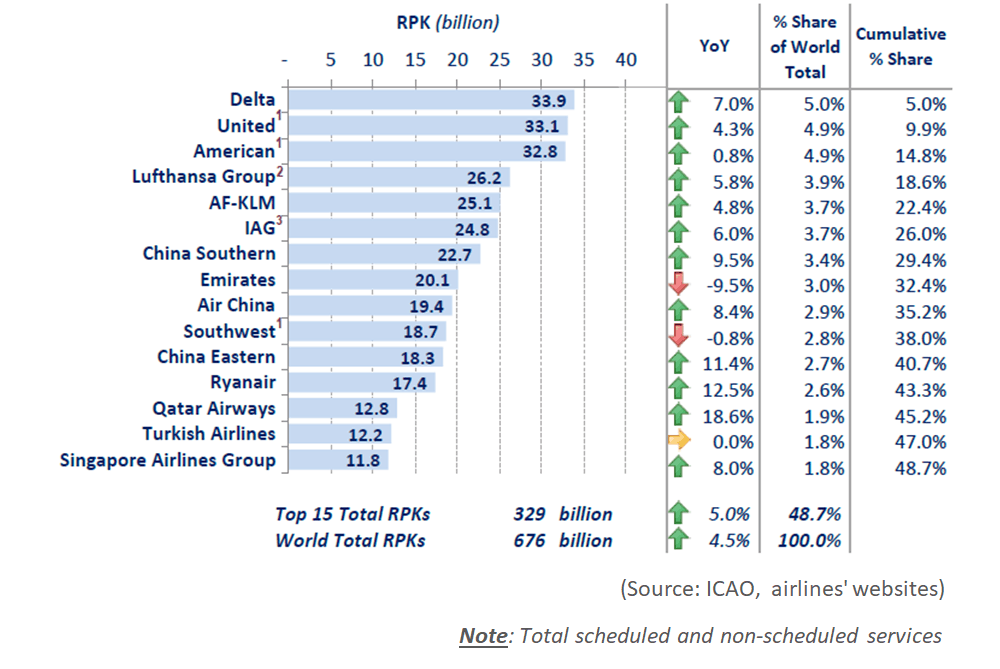 For the third consecutive time, Delta ranked 1st with a solid growth of +7.0%, followed by United, rising at +4.3% YoY. American continued to be 3rd with a marginal growth of +0.8%. Southwest slipped by –0.8% and remained at 10th.

Emirates continued to trend downwards with a negative growth of -9.5% and dropped by 2 positions to 8th. Qatar recorded the highest growth among the Top 15 airlines for the second time this year, at a staggering +18.6% albeit, remained at 13th.

Lufthansa and AF-KLM grew modestly by +5.8% and +4.8%, and remained 4th and 5th, respectively. IAG recorded a solid growth at +6.0% and elevated by 1 position to 6th. Ryanair posted the second-highest growth among the Top 15 at +12.5% albeit remained at 12th. Turkish Airlines remained unchanged and retained its position.

Worldwide capacity expanded by +2.7% YoY in May 2019. All regions posted a slowdown in capacity expansion, except for minor acceleration in the Asia/Pacific.  Despite the deceleration, Europe continued to be the fastest-growing region. For the second consecutive month, the Middle East was the only region posting negative capacity growth resulting in an unchanged YTD capacity expansion, the slowest among all regions.