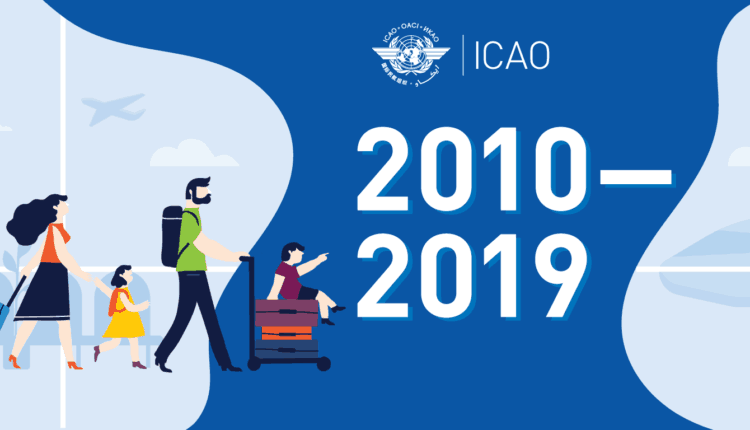 Aviation generates economic growth, creates jobs, and facilitates international trade and tourism. It is recognized by the international community as an essential enabler to achieving the UN Sustainable Development Goals. The aviation sector is growing fast and will continue to grow, with estimates suggesting that the demand for air transport will increase by an average of 4.3% per annum over the next twenty years.

ICAO works with the Convention’s 193 Member States and industry groups to reach consensus on international civil aviation Standards and Recommended Practices (SARPs) and policies in support of a safe, efficient, secure, economically sustainable and environmentally responsible civil aviation sector. As we look forward to the development and growth of aviation in this new decade, we pause to look back at some ICAO milestones that took place over the previous one. For each year we have selected one important event, initiative, tool or project that has contributed to the growth of the industry.

2010: The Diplomatic Conference on Aviation Security

Some 400 participants from more than 80 States and international organizations attended the conference during which a memoranda of cooperation providing a framework for enhanced cooperation with various regional commissions and organizations was signed, including the African Union (AU), the European Union (EU), the Arab Civil Aviation Commission (ACAC), the Latin American Civil Aviation Commission (LACAC) and more.

The tool was designed to be applied globally with the ability to capture the difference in flight trajectory performance in terms of fuel consumption before and after implementation of operational improvements at local, regional or global levels. 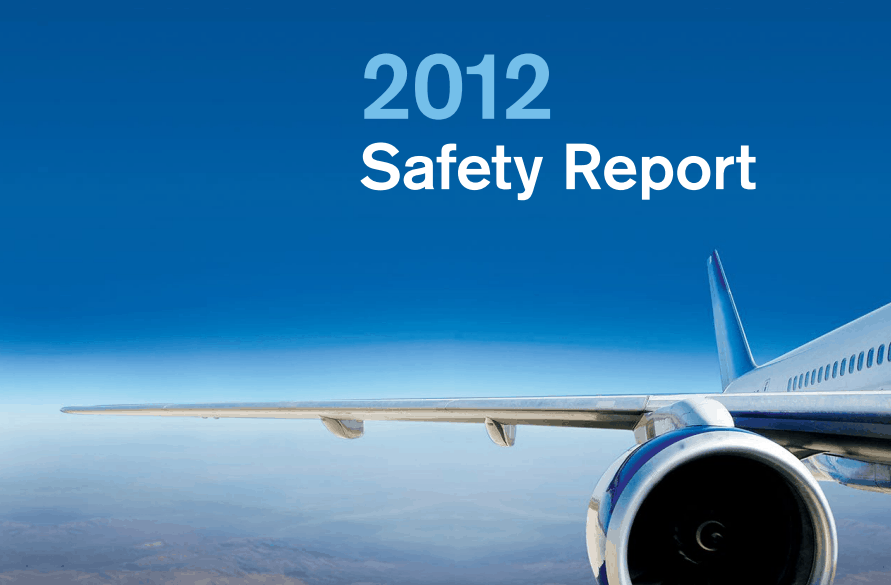 Improving the safety of the global air transport system is ICAO’s guiding and most fundamental strategic objective. The Organization works continuously to address and enhance global aviation safety through coordinated activities and targets outlined in its Global Aviation Safety Plan (GASP).

The 2012-1019 annual Safety Reports are available for download here.

2014: No Country Left Behind Initiative 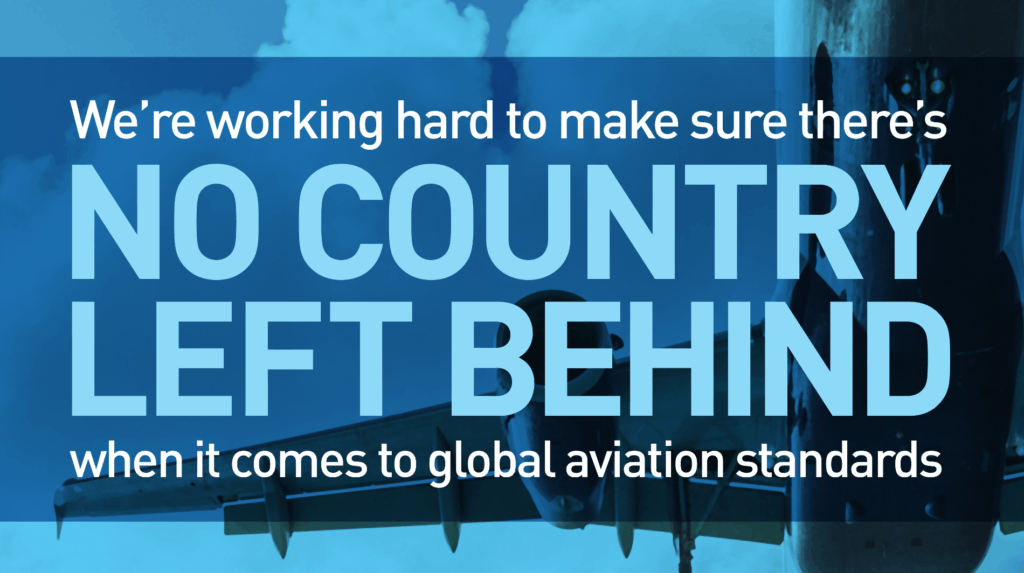 ICAO organized its first-ever Council off-site strategy session in 2014. The purpose was to determine how ICAO can better communicate with and assist its Member States. The session determined that the Organization should focus its activities on States with higher accident rates or security threats and provide more direct assistance to developing countries.

The No Country Left Behind initiative was endorsed to help coordinate and publicize any Organization-wide activities consistent with these priorities. The main goal of this initiative is to help ensure that SARP implementation is better harmonized globally so that all States have access to the significant socio-economic benefits of safe and reliable air transport.

2015: The First woman is appointed the Secretary-General of ICAO

The Council of the International Civil Aviation Organization (ICAO) appointed Dr. Fang Liu of China as the new Secretary-General of the Organization for a three-year term on 1 August 2015. Dr. Liu succeeded Raymond Benjamin of France, who held the position for two consecutive terms since 2009.

She is the first woman ever to be appointed to the prestigious global position heading the United Nations specialized agency for civil aviation, and only the second ICAO Secretary-General from an Asia Pacific State. She was recently reappointed for a consecutive three-year term until July 2021.

You can learn more about Dr. Fang Liu here.

The ICAO Assembly at its 39th Session in 2016 adopted Resolution A39-2, a consolidated statement of continuing ICAO policies and practices related to environmental protection and climate change. It reiterated the two global aspirational goals for the international aviation sector of 2% annual fuel efficiency improvement through 2050 and carbon-neutral growth from 2020 onwards.

The landmark Carbon Offsetting and Reduction Scheme for International Aviation (CORSIA) was also approved by ICAO States at the 2016 Assembly. CORSIA is now a fundamental plank of the international aviation industry’s sustainability strategy. Without CORSIA, our pledge for carbon-neutral growth from 2020 cannot be fulfilled.

In 2017 ICAO, in cooperation with the United Nations Educational, Scientific and Cultural Organization (UNESCO), hosted the first Next Generation of Aviation Professionals (NGAP) Global Summit and Exhibition from 27 to 28 November 2017 at ICAO Headquarters in Montréal, Canada.

The ICAO NGAP Global Summit provided a unique opportunity for the aviation community, education and labour sectors to unite and develop strategies and actions to engage and retain the next generation.

2018: ICAO “Solar-at-Gate” pilot project for the reduction of CO2 emissions 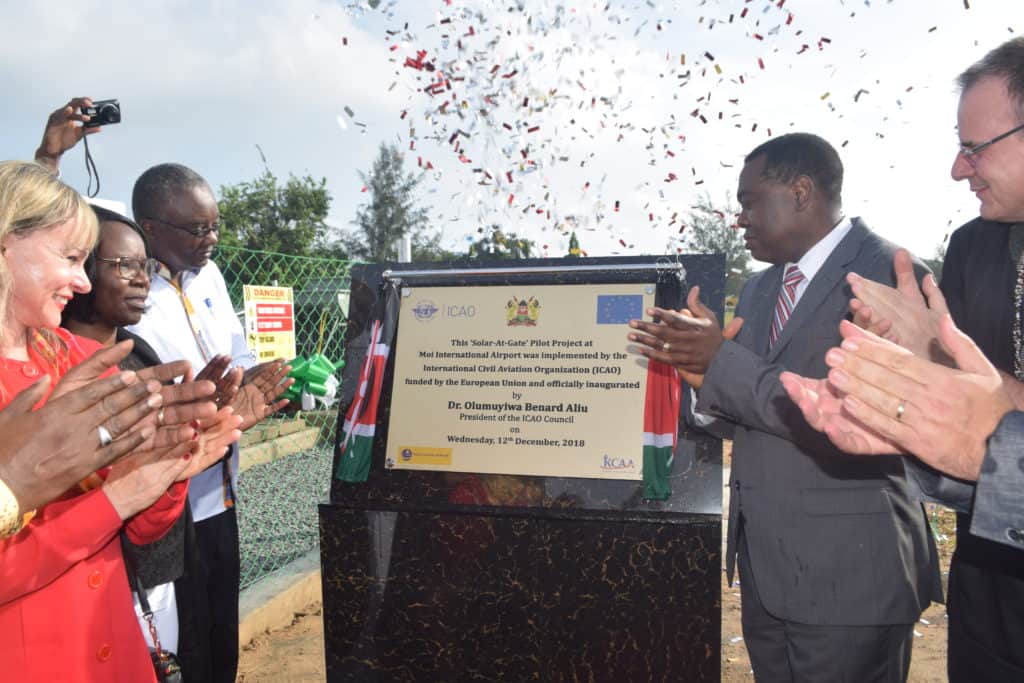 The ICAO’s ‘Solar at Gate’ (SAG) project was launched at the Moi International Airport in Mombasa, Kenya, a first of its kind pilot project in Africa.

The project aimed to reduce carbon emissions from fossil-fuel power generation by using solar energy for the air conditioning and other services a plane uses while it is at the airport gate – typically around one hour for domestic and two hours for international flights.

The project is set to eliminate carbon dioxide emissions from aircraft parked at the gate, which currently uses their auxiliary power unit (APU) powered by jet fuel or airport ground power units (GPU) fuelled by diesel to run onboard systems before departing for their next flight.

The solar facility will generate 820,000 kWh per year and will avoid emitting at least 1,300 tonnes of CO₂ every year, while the airport gate equipment will serve more than 2,500 flights per year, demonstrating a concrete solution to reduce aviation carbon emissions.

2019: 75th Anniversary of ICAO and the 40th Session of the Assembly

The year 2019 marks the 75th Anniversary of ICAO and the signing of the Convention on International Civil Aviation, also known more popularly as the ‘Chicago Convention’. ICAO, Member States and aviation stakeholders around the world celebrated this important milestone that was achieved through an exceptional spirit of cooperation towards fostering social, economic and sustainable development through air transport. 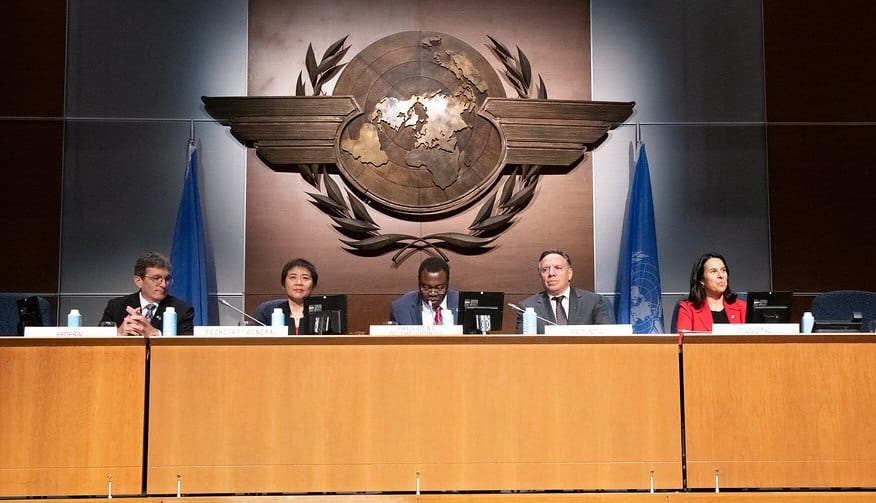 ICAO also held the 40th Session of the ICAO Assembly at Montréal Headquarters from September 24 to October 4, 2019. The Organization’s 193 Member States and a large number of international organizations were invited to attend. The Assembly established the worldwide policy for the upcoming triennium.

In line with ICAO’s commitment to the 2030 Agenda for Sustainable Development, participating delegations worked toward advancing aviation policies, strategies, and capacity that are optimized in terms of unlocking the benefits of international air connectivity.

Sessions from the 40th Assembly are available for streaming on Youtube.