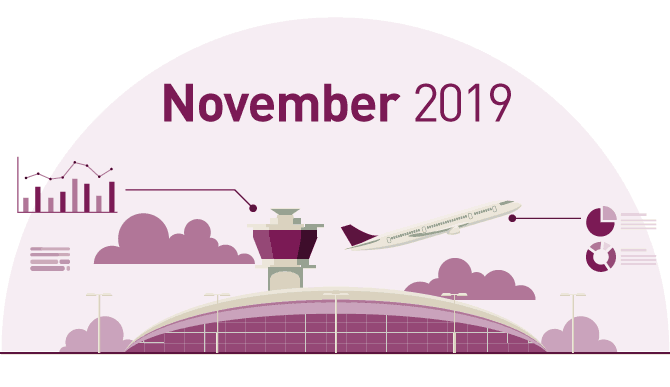 World Results and Analyses for September 2019 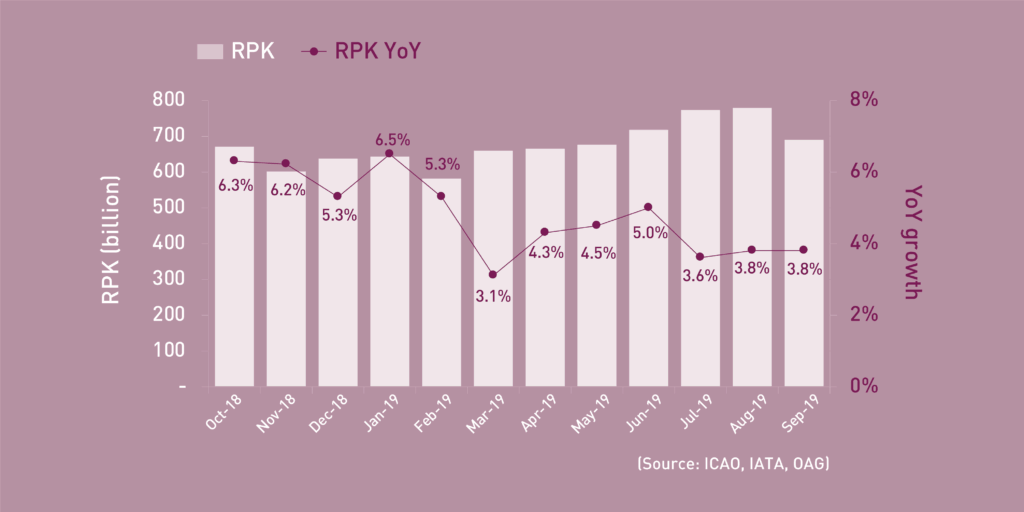 World passenger traffic grew by +3.8% YoY in September 2019, the same pace as the previous month. All regions posted a deceleration in growth, except for a solid pick up in North America which became the top-performing region. Africa reported the most significant slowdown and experienced the slowest growth. For the first time this year, Japan became the strongest growing domestic market, partly due to the comparison with weak performance in the same period of last year, followed by China and the United States. 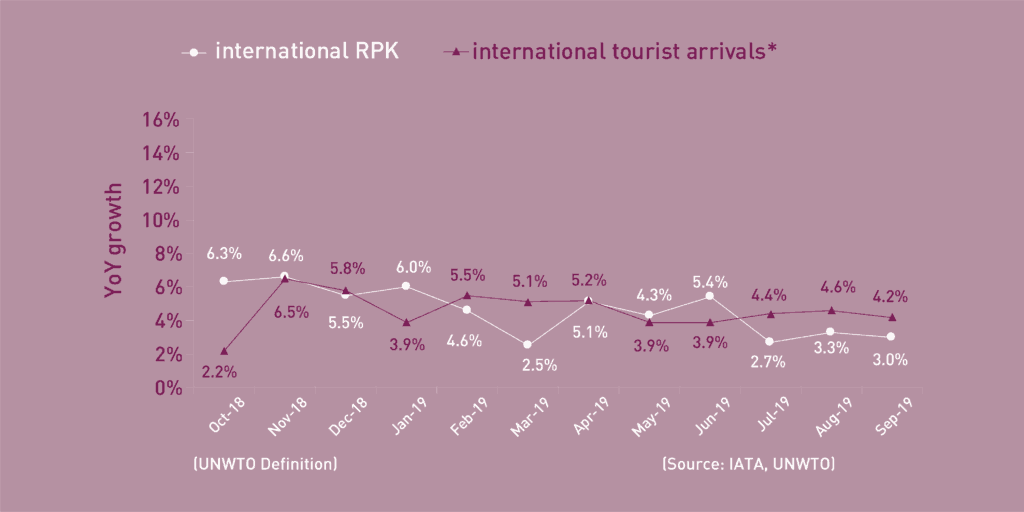 International passenger traffic grew by +3.0% YoY in September 2019, -0.3 percentage point lower than the growth in the previous month. All regions, except for North America and Asia/Pacific, decelerated in growth. Similar to total traffic trend, the most significant improvements and slowdowns were experienced by North America and Africa, respectively. The growth of international tourist arrivals* remained relatively stable. 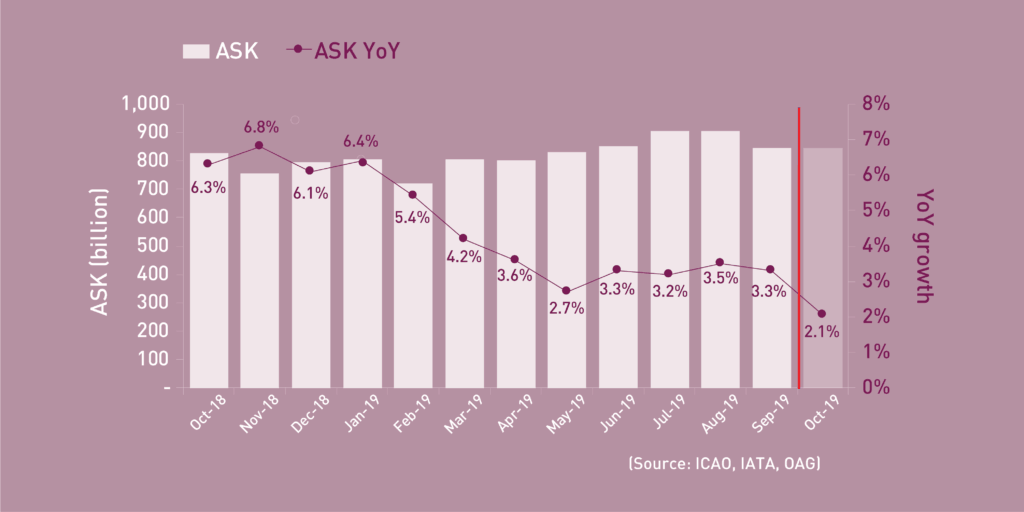 Capacity worldwide increased by +3.3% YoY in September 2019, -0.2 percentage point lower than the growth in the previous month (+3.5%). According to the airline schedules, capacity expansion is expected to slow down to +2.1% in October 2019. 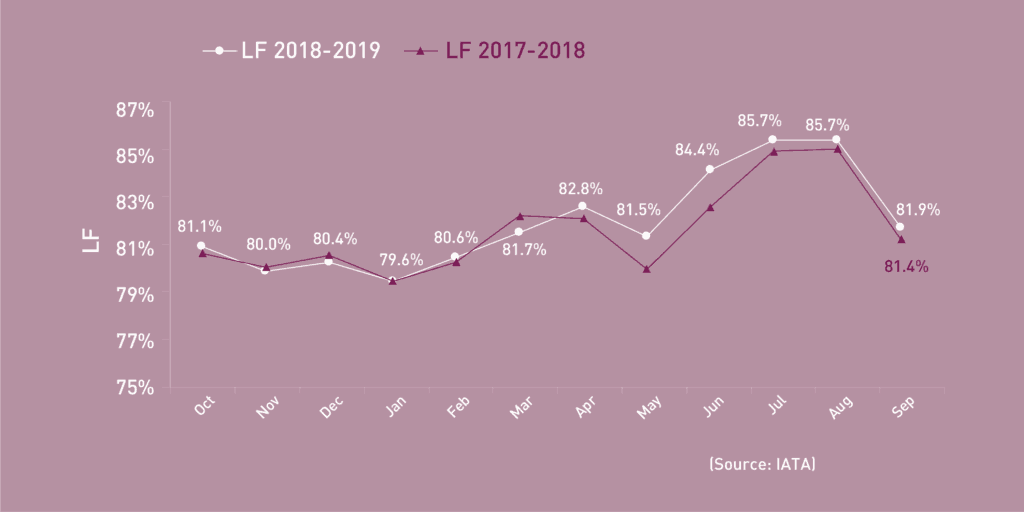 The passenger Load Factor reached 81.9% in September 2019, -3.8 percentage points lower than the previous month. As traffic growth outpaced the capacity expansion, the September LF was +0.5 percentage point higher compared to the rate in the same period of 2018. 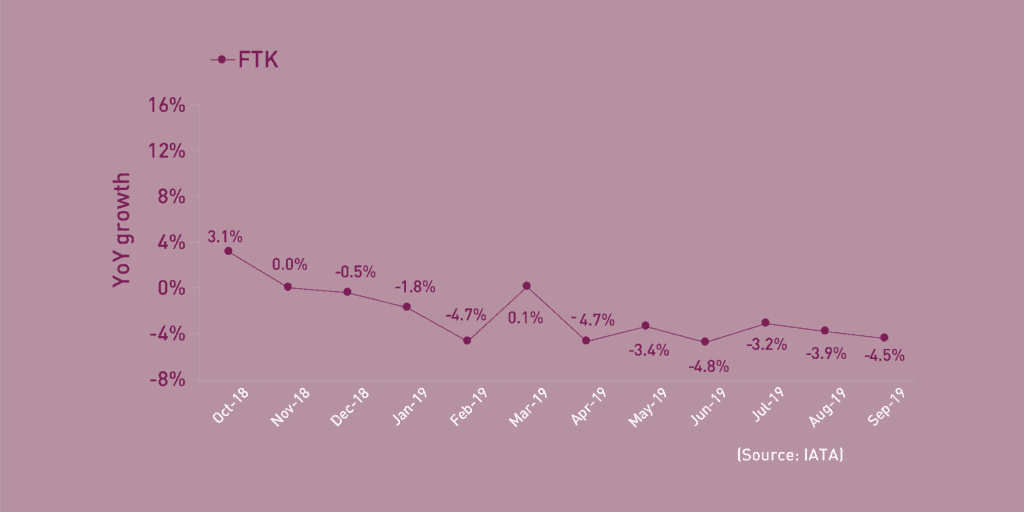 World freight traffic reported a decline of -4.5% YoY in September 2019, -0.6 percentage point lower than the growth in the previous month. Weakness in freight traffic was broad-based with the performance of all regions deteriorated, impacted by the weak global trade attributed to the continued trade tension. Africa remained as the only region recording positive growth, however, the region experienced the most noticeable slowdown. For the fifth consecutive month, the Middle East was the weakest performing region, followed by Asia/Pacific and North America. 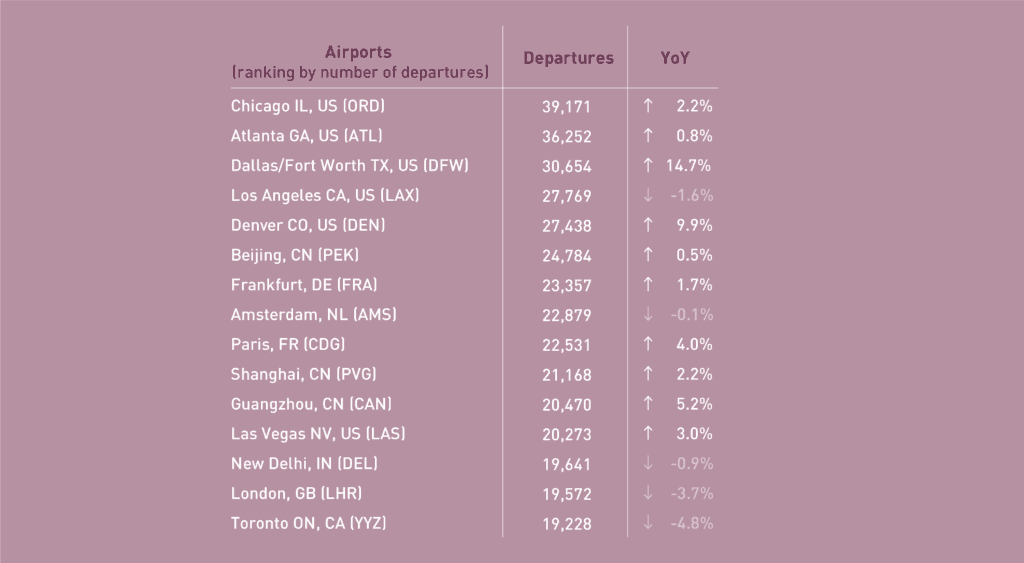 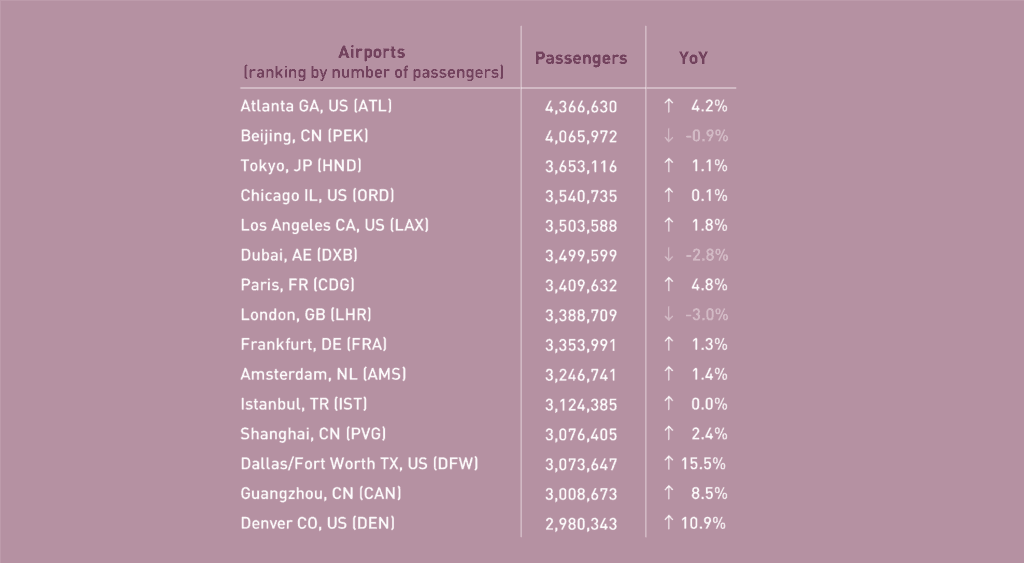 In terms of passengers, the Top 15 airports reported a growth of +2.6% YoY. Eleven out of the Top 15 airports posted YoY increases. Atlanta remained at 1st with a growth of +4.2%, followed by Beijing, albeit with a decline. Tokyo ranked 3rd with a marginal growth of 1.1%. The most significant increase was recorded by Dallas/Fort Worth and Denver at +15.5% and 10.9%, respectively. 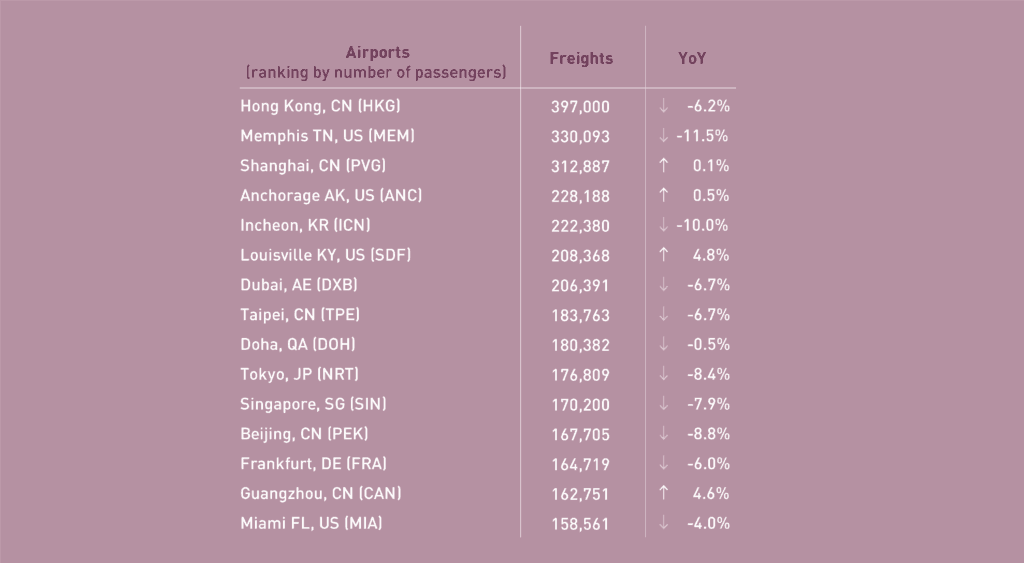 In terms of freight, the Top 15 airports reported a decline of -4.9% YoY. Eleven out of the Top 15 airports posted declines. The most significant decrease was posted by Memphis at -11.5%, followed by Incheon (-10.0%) and Beijing (-8.8%). Louisville continued to record the highest growth at +4.8%, owing to the strengthening of its UPS hub position. This was followed by Guangzhou at +4.6%. 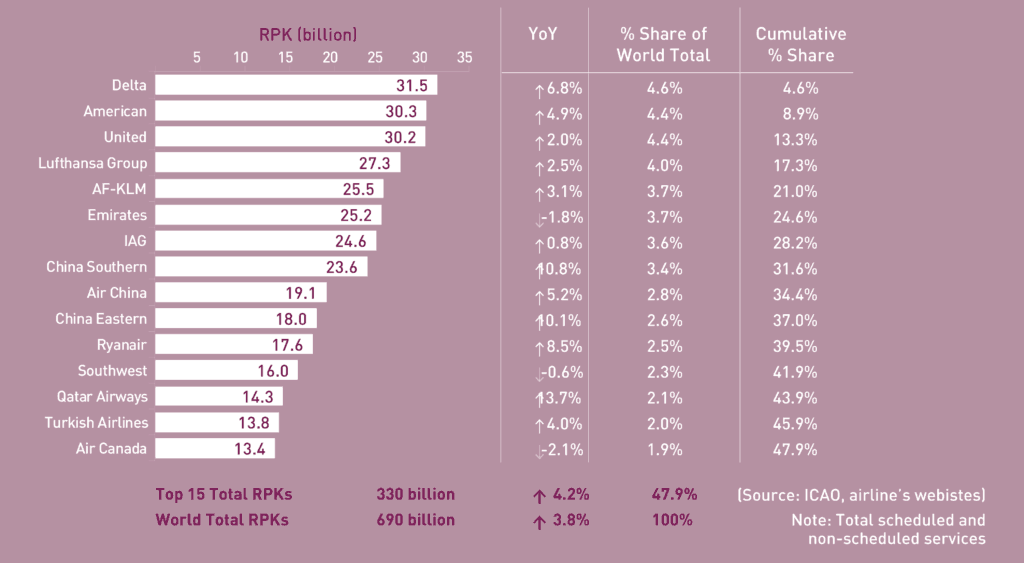 Delta remained at 1st with a solid growth of +6.8%. Followed were American and United, growing at +4.9% and +2.0%, respectively. Southwest continued to post a decline but maintained its position at the 12th. Air Canada remained at 15th, albeit with a negative growth of -2.1%.

With a decline of -1.8% YoY, Emirates dropped 1 position to 5th. The other carrier in the region, Qatar Airways, once again recorded the fastest growth among the Top 15 with an increase of +13.7% and maintained its position on the 13th.

Lufthansa retained its position of 4th and grew at +2.5%. AF-KLM improved two positions to 5th with a moderate growth of +3.1% while IAG went down one position to 7th. Ryanair continued to show strong growth at +8.5% and retained its 11th position. Turkish Airlines grew modestly at +4.0% and remained at 14th.

China Southern and China Eastern recorded the second and third strongest growth at +10.8% and +10.1%, respectively, albeit remained at the same position of 8th and 10th. Air China grew modestly at +5.2% and maintained its 9th position.

Worldwide capacity expanded by +3.3% YoY in September 2019. Three regions, Africa, Europe and the Middle East posted a slowdown in capacity expansion with the most signification deceleration observed in Africa. Asia/Pacific became the fastest expanding region albeit with a slight increase while the Middle East was the slowest growing region.

The YTD capacity expansion was at +3.9%, with Asia/Pacific being the top growing region followed by Europe.